Trichrome should work on most versions of Windows, but if it crashes there's not much I can do to fix it right now. Please, download and try before donating.

Trichrome is a fast-paced time-attack game of colour matching -- make large triangles out of four smaller ones. Score more points by making larger and more interesting shape combinations. A tutorial gets you started. Intermissions break up the intense, high-concentration action into easy-to-play short segments. Most games take about 5-10 minutes to complete.

The simple, minimalist visual design combined with vibrant and beautiful colours makes Trichrome a lovely game to watch as well as play. Scintillating visual effects light up the screen, and 100% real-time synthesized multi-channel sound design will keep you playing.

Trichrome also features an alternate colour and tile set for players with atypical visual perception such as reduced colour vision or colour blindness.

Trichrome is easily approachable for new players, and there are 36 achievements so you can challenge yourself. There are three leaderboards -- high score, fastest gameplay, and most tiles played -- so you can watch your Trichrome skill improve.

With beautiful colours, fantastic sound design, gameplay that's easy to learn, yet with advanced strategy and high-scoring gameplay tactics that you won't master easily, Trichrome is the game to play for fun, for a challenge, to relax and, maybe if you're good enough, to become a Trichrome Legend.

Author's note: I have a friend who has a high score of over 1.5 million points...

Note from 2019: Trichrome was built in 2012 with the then-current version of Unity. There was an iOS version (which Apple killed by aging out older apps), an OSX version (ditto), and a Linux version (I don't even remember where I uploaded it). I suspect the Windows version, available here for the first time since Desura went away, is the only version that can be played today. I'm not even sure it could be rebuilt, as Unity has changed so much since then. Please feel free to download it for free and see if it works, and if it does, come back for a donation if you like the game. 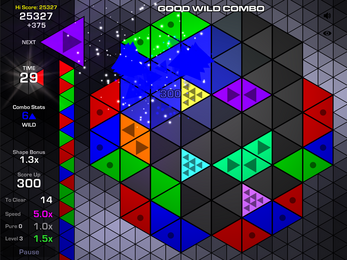 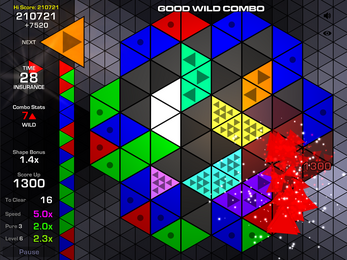 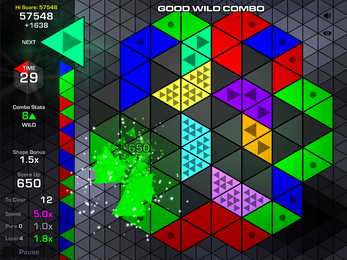